There is a list of 100 topics (subjects, objects or people) Dimchev feels related to in this or another way.
Som Faves is a solo performance of Ivo Dimchev based on some favourite ones from that list.
In space, white as a museum, armed with a wig and a keyboard, Dimchev presents us with a seemingly incoherent collection of topics, which nevertheless gradually build up an intimate portrait and a tragic-comic demonstration of various different ways of dealing with form and content within the context of contemporary dance/theater.

To make this performance happen my body will lose energy, you already lost money, the theater will lose electricity and we all going to lose time. Someone will even lose his own blood. The waste of all this important human resources automatically makes the performance tonight a non-ecological activity for which we all have an equal responsibility. If this information does not make us feel good it can make us feel less lonely. Thank you for coming and enjoy the waste. - Ivo Dimchev

Premiered in 2009, SOM FAVES was nominated in 2010 as the best performance in Holland for season 2009/2010 by the Dutch Theatremaker magazine, as well as selected by the jury of Kaaitheater's Het TheaterFestival as one of the ten best performances in Belgium in that year.

In 2011 the Time Out New York magazine mentioned "Som Faves" as one of the stage highlights of the year.

Clearly, it’s time to give Mr. Dimchev a run that lasts longer than one night - The New York Times 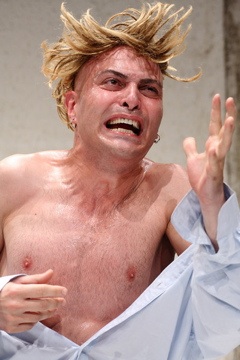 "If you want me to be your mother you have to go to theater."